It was William Kerridge Haselden who gave me my first introduction to cartoons but it is not for that reason that I put his name forward for revival and re-assessment or because it happens to be fifty years since his death. It is the chance discovery of a batch of his work in a Twickenham bookshop that gave me an opportunity to see how greatly he has been undervalued.

Without formal training his drawings first appeared in a couple of short lived publications but in 1903 he was taken onto the staff of the Daily Mirror, which was then a ‘Ladies’ newspaper, in the true Edwardian sense.

His daily cartoons on the fads, fashions, foibles and follies of the age soon earned him a large following. His style was gentle, subtle and his tone conservative. His targets were the upper middle-class householder and his family, and he was greatly exercised by the advances made by women, their careers, their voting rights and their increasing independence from the corset, both the physical and the metaphorical one of male domination. A viewpoint with which at the time the majority of his readers would have approved.

Each year between 1906 and 1935 around 100 of these cartoons were published in paperback under the title of ‘Daily Mirror Reflections’ and it was a stack of these from 1918 to 1931 that I unearthed. His pioneering work with the large single frame divided into four or more panels connected by a single theme gave him the title, according to his Times Obituary, ‘the father of British strip cartoon’.

But it was during the First World War that he became a national figure with the lampooning of Kaiser Wilhelm and his son as big Willie and little Willie. I don’t think the names would have had the sexual connotation that they have today and certainly not in the Daily Mirror but they proved to be an effective morale booster. After the war the Kaiser, in exile in Holland, admitted they had caused him irreparable damage.

It was towards the end of his career in 1930 that I made his acquaintance through the gift of a friend of that year’s ‘Reflections’ while I was in quarantine for measles and I relished his gentle mockery of the contemporary scene but later on I began to find his approach rather fuddy-duddy and his targets outmoded.

The Daily Mirror went tabloid and in spite of Garth, Useless Eustace. Belinda Blue Eyes and the ever-enticing Jane, we changed paper and then it was the Daily Telegraph and the Evening Standard where Low reigned supreme.

My find included all the ‘Reflections’ between 1920 and 1930 with the tantalising exception of 1923 and looking through them I found several that had relevance today particularly the one forecasting the mobile phone some sixty years before its arrival. 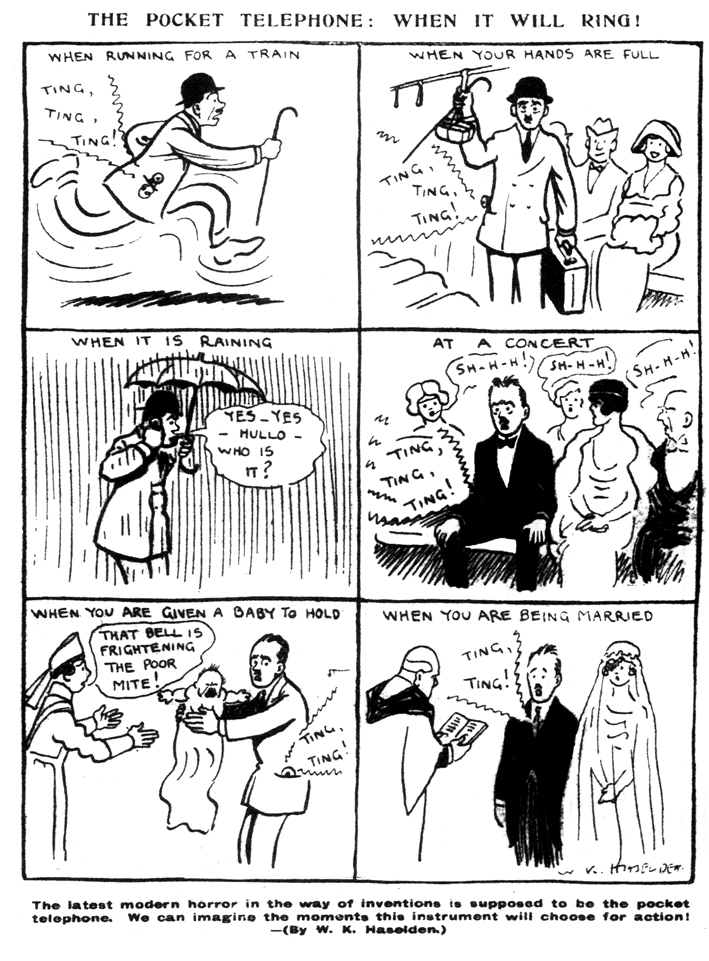 His Times obituary says he was not a political cartoonist, nor was he in the usual sense, he did not support one particular party, or fulminate against any policies nor did he often refer to the great political issues of the day but he drew one which is universal and should serve as a warning to every candidate of every party and be seen by anyone contemplating a political career. But there is a mystery about this cartoon, as although I can picture it in detail albeit having last seen it some 70 years ago, I have been unable to track it down, despite the help of Dr Nick Hiley at the University of Kent and a visit to the Newspaper Library at Colindale. So I feel I have no alternative but to describe it to you.

The first picture shows the candidate sitting at the breakfast table with his wife, young son and daughter at the start of the campaign looking the model nuclear family that they so obviously are. But as the campaign develops, subsequent pictures show him looming ever larger until on election eve ‘he doth bestride the scene like a colossus’. However, the day after the election roles are reversed and the family loom over him while he shrinkingly tackles his breakfast egg.

Now it may be that the young budding cartoonist or even an old budded one might like to use this idea and he, or she of course, would be welcome provided they added the usual ‘with apologies’ to W.K.H or if in the absence of any evidence of authorship they are quite at liberty to put with apologies to me!