Guardian cartoonist Steve Bell reports on his recent trip to the 2003 AAEC convention in Pittsburgh. 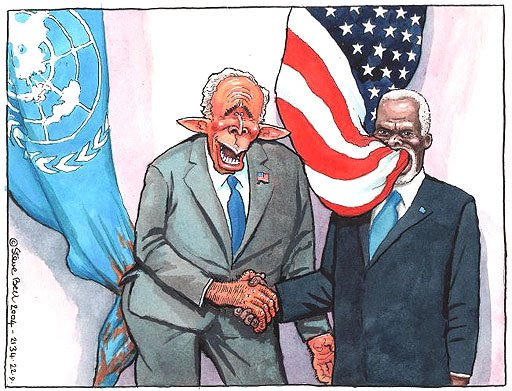 After the explosion of programmes and special articles about America: how we see it and how it sees itself, I bring first hand news from the heart of the empire. I've been in Pittsburgh for the convention of the Association of American Editorial Cartoonists. I schmoozed with a self-interested group of people who do the same job as I do, only in America, which is to say the US and Canada. Did I mention the war? Now and again.

We often lay claim to being the birthplace of political cartooning because of the great James Gillray, the 18th century caricaturist who ridiculed the ruling class, but in fact the political cartoon as we know it, in newspapers rather than in limited expensive editions of engravings, was born in the US. The other great American invention was the newspaper cartoon strip, and it's the rich language they forged that we all still use.

The granddaddy of all newspaper editorial cartoonists was Thomas Nast (1840-1902), an immigrant born in Germany who drew right through from the Civil War to the end of the 19th century. His most outstanding work was for Harper's Weekly and it's widely believed he was single-handedly responsible for the downfall of an administration, that of New York's legendary corrupt William 'Boss' Tweed and his Tammany Hall ring. This may be something of an exaggeration, but it's one of the reasons my American colleagues take their editorial independence seriously enough to have a national association. Nast's style was much influenced by Punch's Sir John Tenniel, but in fact the two are as different as milky porridge is from a chilly-dog. Tenniel was a fine draughtsman, but his ideas were generally handed down to him from the august heights of the Punch editorial table.

Nast was, to say the very least, ferociously opinionated and his cartoons were not afraid to get their hands dirty. His attacks were vicious, often personalized and always deeply felt. He it was that invented the elephant representing the Republicans. In a more peaceful mode he also invented the image of Father Christmas as a genial fat bloke with a beard. It's been suggested that this was a self-portrait.

We don't have conventions for editorial cartoonists in the UK. Partly because there aren't enough of us, and partly because most of us are incapable of arranging a piss-up in a brewery. Also there's not the demand.

In the US there are hundreds of cartoonists and they are all spread over this vast country working on papers that are essentially local. There is only one 'national' newspaper there, which barely qualifies for the title and that is called USA Today, widely known as "McNews" with good reason. The editorial cartoonists have their own association, the AAEC, with full-time staff based in North Carolina and their ability to organise is awesome. They crave, need and cherish this gathering and it really is a splendid occasion. Where in the UK when cartoonists meet we tend to have a few drinks and moan about money and our colleagues, here, while they certainly do a fair bit of that, cartoonists of all shapes, sizes and shades of opinion (though the majority are male, white and liberal) actually talk shop and have learned discussions, panels and guest speakers. The 17th floor of the massive William Penn hotel is occupied by the convention.

The mood is relaxed and informal, though a little earnest. Discussions centre around the role of cartoonists, their different styles, the kind of audiences they address and the persecution of cartoonists abroad. They are impressively good at organising support networks for persecuted colleagues abroad and at home where, in journalistic terms at least, cartoonists are considered to be at the bottom of the food chain. Jobs are increasingly under threat.

There is a defensive feel about this meeting for there is a distinct US editorial cartoon house-style that has prevailed for many years, and is now showing signs of breaking up. Its most distinguished exemplar is the work of the late Jeff MacNelly. The style is bold, dramatic, much given to labels and heavily influenced by the like of Jack Davis from the golden age of Mad magazine. The new style on the block is exemplified by the syndicated young tyro from New York, Ted Rall. It's angry jagged and wordy. This style clash is not necessarily political, though I am personally gratified to see Rall's consistent depiction of Bush as a rabid fascist dictator. One of the most enjoyable debates is a stylistic one between the "Alties" (ie: the alternative new wave) represented by Rall, and the "Nasties" (ie: those working in the tradition of Thomas Nast) represented by Steve Kelley of the New Orleans Times-Picayune.

As with all the best debates the premises are utterly specious. Rall calls for the abandonment of all labels, which is fine, but also calls for the abolition of the use of metaphor, which is ludicrous. Kelley, whilst defending what is essentially a moribund style, takes Rall to pieces. The clincher is when he points to one of Rall's own cartoons where Rall has drawn a knife-fight scene and, presumably for clarity, written "STAB" in the air above it. However, Kelley it was who expressed this classic, only- in-America euphemism: "I don't want to see pictures of people going to the bathroom!" As another panellist Steve Benson of the Arizona Republic, wisely pointed out, taste really is the enemy of creativity in this business."

The problem I sense is that both sides of the debate want to spell everything out, forgetting the essential notion that cartoons float in a sea of text. We really should be able to make the assumption that our readers have read at least some of the text and may already be aware of some of the concepts, images and metaphors we toss around with such glee. We can't expect everyone to understand, of course, but it's not being elitist or esoteric to say that we shouldn't let this cramp our style. An editorial cartoon is always going to piss someone off if it's doing its job properly, so what's wrong with pushing the boundaries a bit.

This urge to spell everything out is part of a noble and public-spirited American tradition, the mission to promote civic virtue and the value of openness, tolerance and mutual respect. These are essentially liberal values, yet, particularly at the moment, the word "liberal" ids a term of vile abuse. It would be gross exaggeration to describe this as a climate of fear, but people are definitely worried about what is happening to their constitutional rights in the context of the War On Terror.

Flying into this big, bustling, thriving cauldron of commercial activity and being required to remove your shoes and belt before entry, you're prompted to wonder what on earth it is they're so frightened of. Despite the gun lunacy, the poverty, the crime, the lack of public healthcare, this must be one of the safest places on earth to live. In a bizarre way the only thing they are vulnerable to is lurid terror fantasies, which unfortunately the events of 11th September, aided by the likes of Fox News, have fuelled with a vengeance.

Watching Fox makes you realise just how rampant the right is at the moment, and reading the New York Times, a supposedly great liberal newspaper, makes you wonder if they would ever say boo to a goose, let alone tell truth to power. It seems dull, ponderous and timid. It's also one of the few major papers without its own editorial cartoonist. It runs syndicated stuff, but that's not the same thing. Having its own editorial cartoonist is at least a sign that a paper is prepared to put somebody's nose out of joint now and again.

The net result of this timorousness, which is not exclusive to the New York Times by any means, is that Bush gets away with lies and murder while the press beats itself up about the ethics of Jayson Blair, the young, black, New York Times journalist who notoriously faked stories. There is a fascinating collection of awkward, censored and spiked cartoons from all over the US on display at the Andy Warhol museum in Pittsburgh, and it's striking how mildly controversial they are. They're good though, because they're clever, funny and right on the ball, and one can only despair at the level of editorial queasiness that required the suppression of many of them.

I'm sure things will change in this vast country, which on one level seems to have its head so far up its own arse that it can't see the Bush for the brownies; it's too dynamic not to, and it will move in its own mysterious way in spite of the best efforts of Fox and the Bush junta. I suspect the success of Fox is evidence of the fact that people here actually enjoy being outraged. It's surely the role of the cartoonist to outrage the outrageous.