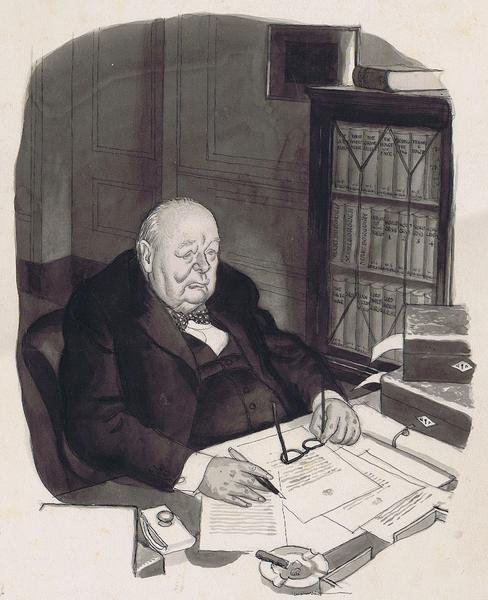 “Man goeth forth unto his work and to his labour until the evening,” Leslie Illingworth in Punch, 3 February 1954

From July 1949 until May 1958, Leslie Illingworth was responsible for drawing over ninety percent of the political cartoons that appeared in Punch. Under the editorship of E.V. Knox (1932 to 1949), Illingworth had been allowed some latitude for controversy in his cartoons. Under Kenneth Bird (1949 to 1952) conspicuous progress in design was not matched by editorial pluck. Illingworth was thus increasingly restricted to statements of fact and the journal’s note became more muffled. The General Election of 1950 found Punch hanging uncertainly betwixt parties, a conservative journal in tentative search of socialist readers. Illingworth was called upon to stay well above the issues and personalities. When Kenneth Bird retired as Editor, Malcolm Muggeridge succeeded him. It is safe to say the proprietors were getting more than they bargained for. During five controversial years under his direction, Punch became more pointed, relevant, and audacious than it had been since the early, radical days of Douglas Jerrold and John Leech. No longer was the cartoon apt to dangle from a tenuous snippet of news. The practice of pairing the cartoon with a signed piece began on January 21 1953.

The question of Prime Minister Churchill’s retirement was raised gently in a cartoon of March 4 1953, and somewhat less tactfully another seven months later. (Alexander at Babylon being pressed by his officers to appoint a successor, October 7th).

According to Claud Cockburn, a colleague and friend, Muggeridge was seeking a new market for satire and saw that "the prerequisite for success was to make a loud nasty noise of the kind nobody associated with Punch." Cockburn met Muggeridge at the station in Limerick in late January 1954. "As he sprang from the train [he] remarked with profound satisfaction that the issue of the magazine he had just sent to the press was ‘likely to get us all in a lot more hot water.’" This was the number of February 3rd, with an Illingworth drawing of the Prime Minister, listless at his desk, the face registering unmistakable effects of a partial paralysis he had suffered the preceding summer, the bookcase of his writings full, and closed. The caption was taken from Psalm 114: Man goeth forth unto his work and to his labour until the evening. On the opposite page to the cartoon, In an accompanying editorial, A Story Without an Ending, Muggeridge ostensibly traced the decline of a Byzantine ruler, Bellarius: ‘By this time he had reached an advanced age and might have been expected to settle down to an honourable retirement… Instead he clung to power with tenacious intensity. His splendid faculties... began to falter. The spectacle of him thus clutching wearily at all the appurtenances and responsibilities of an authority he could no longer fully exercise was to his admirers infinitely sorrowful, and to his enemies infinitely derisory.’

Churchill was bitterly hurt by the cartoon: "Yes, there’s malice in it. Look at my hands - I have beautiful hands… Punch goes everywhere. I shall have to retire if this sort of thing goes on.’ Churchill’s doctor, Lord Moran, was also shocked by what he considered a vicious caricature of the Prime Minister: "There was something un-English in this savage attack on his [Churchill] failing powers. The eyes were dull and lifeless. There was no tone in the flaccid muscles; the jowl sagged. It was the expressionless mask of extreme old age."

According to Cockburn, "It had, immediately, the desired effect. Leading conservative publicists and politicians howled with rage, helping with their din to notify one and all that Britain had something new in the way of magazines. Inevitably a cartoon of this kind – a kind that, in relation to the Grand Old Man, had been taboo for years – produced a little friction and head-shaking even inside the office." Muggeridge later recalled that "Perhaps the biggest row [with the proprietors] came over a cartoon of Churchill… suggesting that it was time he went. This was so obviously true, had been so frequently remarked, especially among Churchill’s closest associates, that it infuriated everyone. It was rumoured that after the publication of the cartoon in Punch, Muggeridge became well known in Churchill circles as ‘Buggeridge’. Angry letters poured in." One of these letters of complaint was from Christopher Soames, in defence of his father-in-law as Churchill later recalled: "Christopher wrote to that awful fellow, Muggeridge. He knows him, lives in his neighbourhood. Muggeridge wrote back saying that he was a journalist. If he held opinions, he must express them; said that he was one of my greatest admirers, but that I was no longer up to the job."

Punch historian R. Price classified the cartoon among the editor’s "calculated exhibitions of what die-hard readers considered bad taste" and reported that it cost the magazine "a number of regular, inherited readers". He also felt that the venture showed that Punch was once again "a claimant for power". Circulation improved, advertising declined. Muggeridge and Mr Punch finally parted company at the end of 1957. Illingworth suspended his association five months later and, except for a pair of non-political double pages in 1959, did not appear for four years.