Born on 7 April 1891 in Dunedin, New Zealand, David Alexander Cecil Low was the most vigorous and outspoken political cartoonist since the Age of James Gillray. Low arrived in England in 1919, fresh from the Sydney Bulletin in Australia, where his growing reputation as a political cartoonist had led the Cadbury family into offering him a post on the Evening Star, a radical evening newspaper. Low's upbringing in the egalitarian and Liberal environment of New Zealand and Australia quickly led him to develop a distaste for the snobbery and inequalities which he found upon his arrival in England: 'I came from the outside world without respect for institutions and persons that have no right to respect.'

Low's unique and forceful style of draughtsmanship was ahead of its time and set new trends in British newspaper cartooning. His seemingly uncomplicated oriental brush style influenced not only his major rivals at the time, but also generations of cartoonists that came after him. In a few brush strokes, Low could reproduce the features that would make some character or personality instantly recognisable. According to the former cartoonist of the Daily Telegraph, Nick Garland, 'Low's ability to catch a likeness is downright uncanny. If he gives us only a forehead and one eye peeping round a corner, we are able to identify the owner, even now, 70 or 80 years later. He could capture an expression with extraordinary subtlety, adding just a touch of apprehension to a scowl, or a glimmer of hope  to a mask of defeat.'
To complement his draftsmanship, Low had a deep intellectual awareness of everything political.  It was not surprising that senior politicians at Westminster soon sat up and took notice of how he used his pungent wit to depict them in his cartoons, with what the historian AJP Taylor later called 'savage realism'. Stanley Baldwin, Conservative Prime Minister and Opposition Leader during the 1920s and 1930s, was one of Low's most popular targets. Although Baldwin recognised Low's qualities as a cartoonist, he often cringed at the way he was treated: 'Low is a genius, but he is evil and malicious. I cannot bear Low!'
Throughout his career, the speed with which Low seized on the salient point of great political events was extraordinary. By reducing sometimes complex happenings and ideas into seemingly simple aesthetic patterns in black and white, Low took control of this medium like no one else had done before. Winston Churchill was one more politician who recognised Low's enormous talent: 'Low is a great master of black and white; he is the Charlie Chaplin of caricature and tragedy and comedy  are the same to him,' he commented.
Lord Beaverbrook, who had been trying unsuccessfully for some years to secure Low's services for his own London newspaper, the Evening Standard, finally got his man in September 1927. In doing so, Beaverbrook had to accept Low's terms, which were for a half-page cartoon, unprecedented then and unheard of today in British journalism. Sidney Strube, Low's 'friendly' rival on the Daily Express, later claimed it was Low who had won for the cartoonist what they had always wanted - space - and felt that all cartoonists owed a huge debt to him. Low also gained a unique contract that allowed him 'complete freedom in the selection and treatment of his cartoons'. Under these conditions, Low was to produce the best work of his career, and his reputation continued to grow as his cartoons were also successfully syndicated by Beaverbrook both at home and abroad. 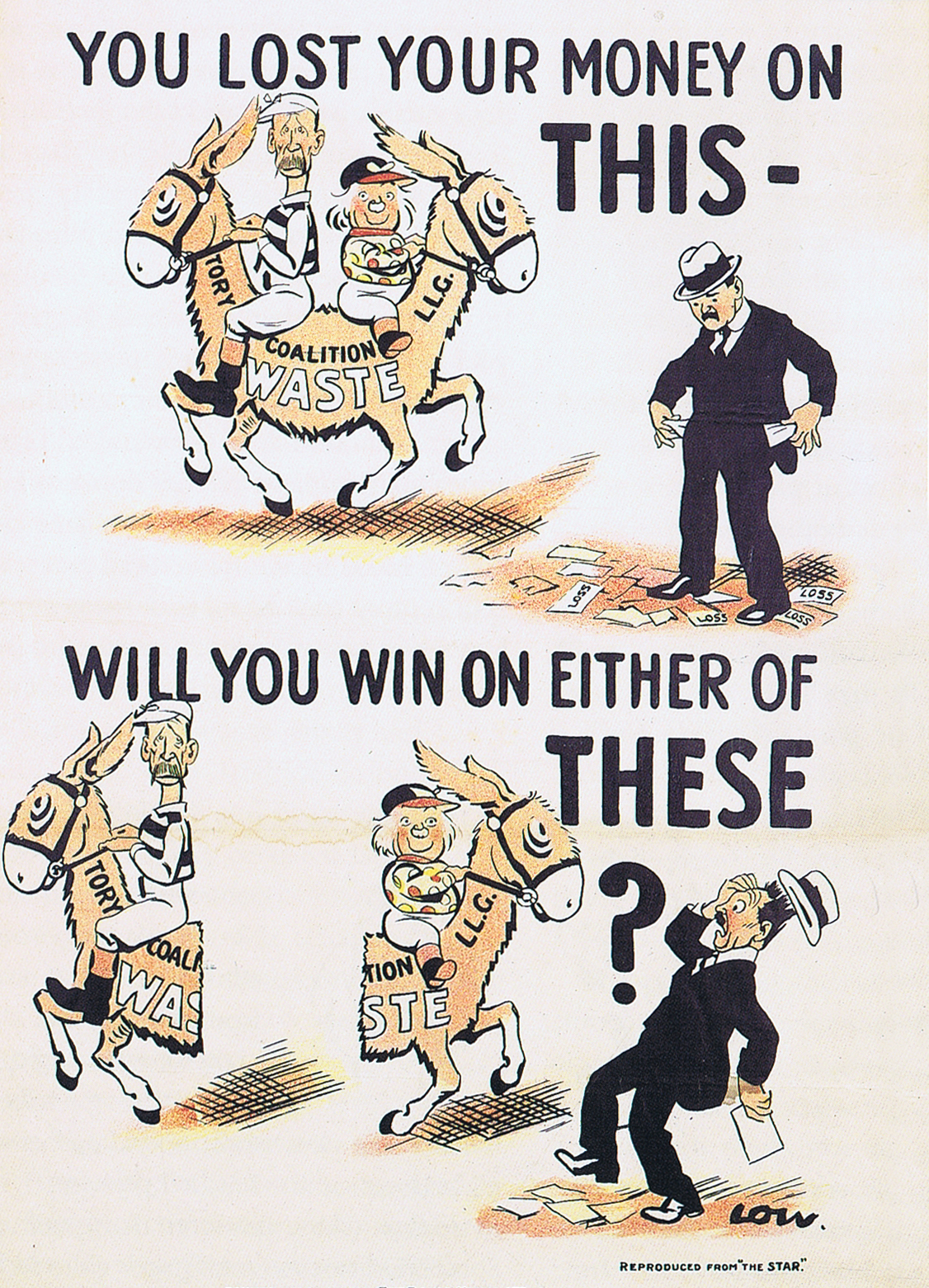 David Low's two-headed Ass represented the Lloyd George Liberal Conservative Coalition Government.Low was inexhaustible in invention, especially in the use of real individuals or his own creations to symbolise both institutions and attitudes. No cartoonist has ever matched Low for his symbolic allusions, with his first great allegorical creation being the two-headed donkey that characterised David Lloyd George's coalition government between 1918 to 1922. The ass 'without pride of ancestry or hope of posterity'; was an instant success for Low. Michael Foot, Low's editor at the Evening Standard, believed that the constant appearance of the ass in the Star undermined Lloyd George's coalition possibly more than any other single factor. Low's greatest creation, the bloated and walrus-faced Colonel Blimp, appeared for the first time in 1934 as a symbol - and dictionary definition - of stupidity. In 1937, 'blimpery' received for the first time a dictionary definition denoting 'an extreme die-hard type of outlook'. Low's last great symbol, the TUC carthorse, which represented the trade unions as in the cartoonist's words 'honest but simpleminded', started to appear in the Evening Standard towards the end of the Second World War. Understandably, it did not go down well with trade union leaders.
Low's 'high political intelligence', as Foot called it, meant that he had the knack of correctly predicting future events. For example, he saw that the cost of war reparations to the vanquished German people would lead to a future war, as Germany would eventually demand revenge for its humiliating treatment at Versailles. He foresaw the futility of Churchill's anti-Bolshevik crusade in 1919, and in 1930 predicted Ramsay Macdonald's desertion from the Labour Party to form a national Government. He also foretold the demise of the League of Nations after its failure to protect Manchuria from the Japanese in 1931. Most impressively of all he saw, as early as 1930, the dangers to European stability from Hitler and Mussolini and correctly prophesied  what would happen if a firm stance was not taken against them. On the great international issue of the 1930s - the rise of European Fascism  - Low was triumphantly and tragically correct.
Low's direct opposition to appeasement made it appear that he was fighting his own private war against the dictators. Believing there was more stupidity than wickedness in the world, Low explains why he portrayed Hitler and Mussolini not as evil or frightening monsters, but as fools: 'No dictator is inconvenienced or even displeased by cartoons showing his terrible person stalking through blood and mud. That is the kind of idea about himself that a power-seeking world-beater would want to engender. It not only feeds his vanity, but unfortunately it shows profitable returns in an anxious world. What he does not want to get around is the idea that he is an ass, which is really damaging. I shall always remember Hitler, for instance, not as the majestic monstrous myth of his propaganda build-up, but as the cissy who whined to the British Foreign Office about his dignity when I ran him for a while as a comic-strip.' 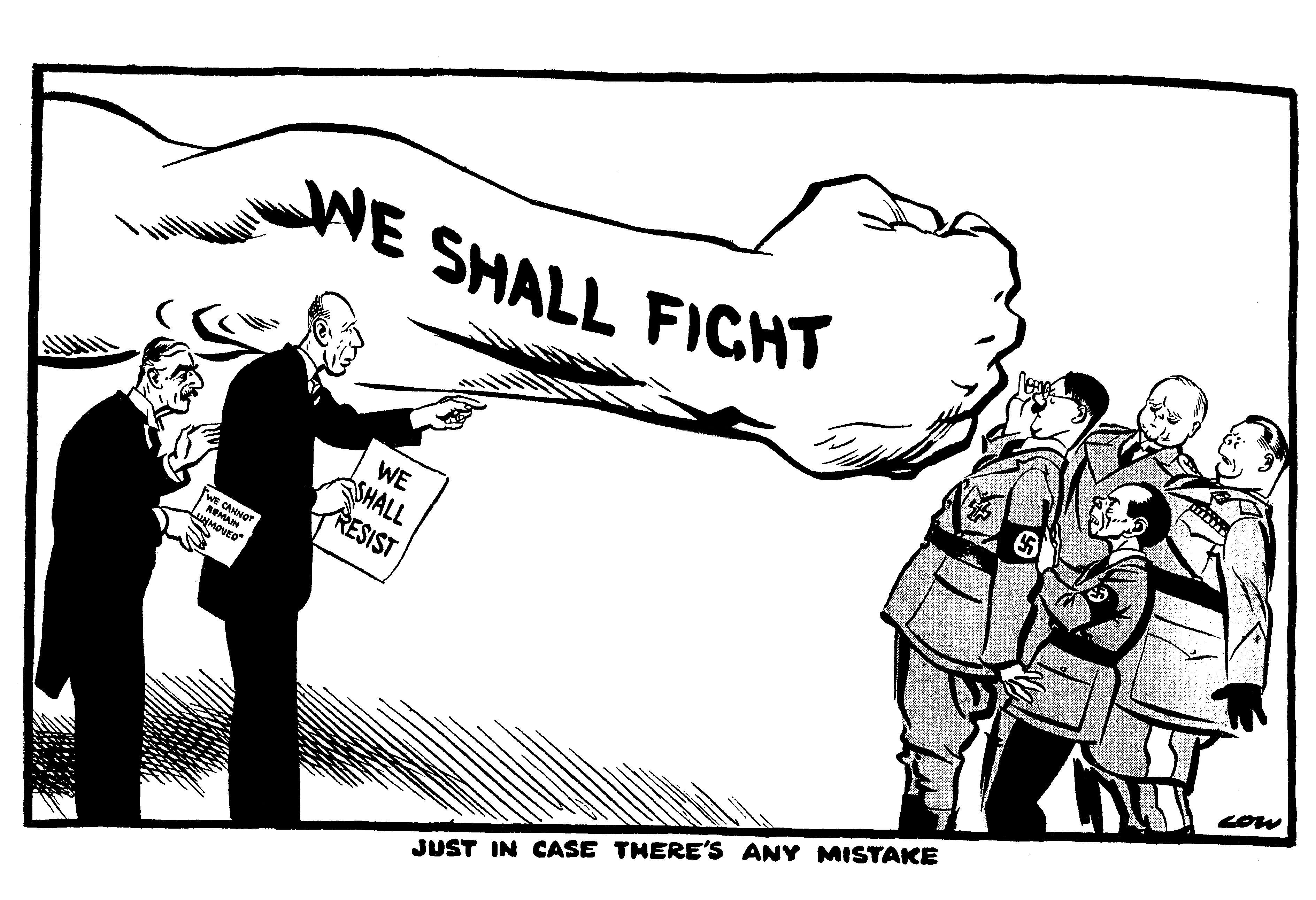 Low's cartoons ridiculing Chamberlain's policy of appeasing the dictators were by no mean popular with those that saw them at the time. Few wanted to accept Low's warnings because the only alternative to such a policy seemed to be another major European war, when the memories of the 'war to end all wars' were still fresh in the minds of many. AJP Taylor believed that, as Low's condemnation of non-intervention against the fascist powers in the 1930s sharpened, so did the opposition to the stand the cartoonist was making. In 1937, this even led to a meeting between the then Foreign Secretary, Lord Halifax, and Low in order to persuade the latter to tone down his ridiculing of Hitler because of the apparent damage his cartoons were doing to Anglo-German relations. However, when war did come, in September 1939, Low had shown the world that he had been right all along. He then produced some of his most memorable war-time cartoons, which, to this day, bring back the spirit of the times. The eminent film critic, Dilys Powell, certainly thought so: 'The long series of Low's cartoons through the belligerent peace to the full scale re-opening of war, is to re-capture the mood and oppression of all those years,' she said.
After Germany and Japan had been defeated, Low took up a similar stance with Stalin and the Soviet Union from the late 1940s. This time, the lessons of appeasement had been learnt and Low no longer sounded as a voice in the wilderness. In 1950, Low - feeling stale after 23 highly successful years at the Evening Standard - joined the Labour-controlled Daily Herald. After three years there, he joined The Guardian where he remained until a few days before his death on 19 September 1963 at the age on 72. Low, as a cartoonist, was lucky enough to have lived through "interesting" and momentous times. It certainly brought the best out in him.
What sort of impact did Low make on those who saw his cartoons in the newspaper? There were no polls at the time asking such questions, so one cannot even approximate, for example, how many more votes he may have got for Labour or his effect on the public's opposition to appeasement. Political cartoons usually confirm our prejudices and opinions, rather than change them. Low's cartoons did not appear to have had any influence on his proprietor, Lord Beaverbrook, one of his greatest admirers. Low was, according to Beaverbrook 'brilliant in drawing, inexhaustible in invention - and mostly wrong in viewpoint.'
AJP Taylor believed that what Low did achieve was to get his readers to think about how important issues of the day. Low was more likely to influence the subject matter people thought about, than what they actually thought. This is confirmed by historian Martin Walker, who was of the opinion that cartoonists are likely to be at their greatest influence when 'they encapsulate the existing mood of their audience, rather than when they try to create one.'
In what way can Low improve lour understanding of the 20th Century? Stretching over 50 years, his cartoons are an unrivalled and revealing source, rich in aesthetic, social, economic and political comment. It can even be argued that because Low was often proved right, his work captures the significance of historical events more closely today tha nfor those who lived through them. Seymour-Ure makes the point that a Low cartoon, which may seem to us 'a spot-on comment on the short sightedness of policy towards Czechoslovakia may have seemed less so at the time'. At GCSE or at A-level, Low's cartoons are far more prevalent in textbooks and exam papers than any other cartoonists because his style, composition and sense of irony are timeless, still hitting the mark. In 1941, historian Bernard Pares had the foresight to right: 'When the history of these time comes to be written', Low's cartoons would be "the best pointer of all"'.
Those who have studied 20th-century history at school may not be able to recall Low's name but can usually remember such cartoons as Rendezvous, Very Well, Alone and All Behind You, Winston. They may even remember Low's representations of Hitler, Mussolini, Chamberlain, Churchill and Stalin, more than the images of them in photographs. Low often declared he was 'a nuisance dedicated to sanity'. This 'nuisance' left a visual legacy that will forever present us with an invaluable guide to many of the major historical events of the last century.