'A Cartoonist's response to the events of 11th September 2001'

On Thanksgiving Day last November over 100 members of the American National Cartoonists’ Association dropped their usual storylines to stage a collective act of tribute to the victims of the 11th September terrorist attacks. While the continuing national trauma in America is understandable, most of this stuff was pretty mawkish, perhaps the worst being the eternal GI Beetle Bailey riding an American eagle past a cloud labelled "Peace". 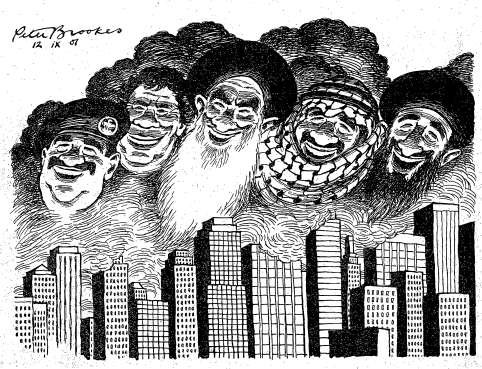 Such levels of solidarity and, indeed, self-denial are unlikely to happen among British cartoonists in any circumstances, even after something as horrifying as the attack on the World Trade Centre. True, in the immediate aftermath most cartoonists exercised some levels of self-censorship: personally, I was initially too numb to do anything other than the kind of "why oh why" cartoons I normally deplore. At least I got them published, unlike cartoonists Tom Halliday and Martyn Turner, who both had cartoons rejected by The Scotsman, being told to draw something less critical of America. Financial Times pocket cartoonist Jeremy Banks had it worse, being instructed to leave the whole subject alone and to concentrate on other, unrelated news stories (of which there weren’t any).

Steve Bell didn’t feel so constrained in The Guardian, which ran a cartoon on 13th September of Bush saying "We’re gonna bomb... abroad!" The following Monday I said on Radio 4's Front Row that in his place I wouldn’t have drawn a cartoon like that so soon after the event, when cheap gags seemed wholly inappropriate. The next day Steve and I had a full and frank exchange of views in which he called me a "pompous c**t" and berated me for drawing a weeping Statue of Liberty for The Mirror, while I called him an insensitive w****r. Interestingly enough, Times cartoonist Peter Brookes upbraided me for a cartoon of mine in that day’s Guardian showing a bruised and battered Uncle Sam swallowing Fast Acting Pain Relief Missiles, ignoring the Middle East tumour on the back of his neck, for its callous insensitivity. 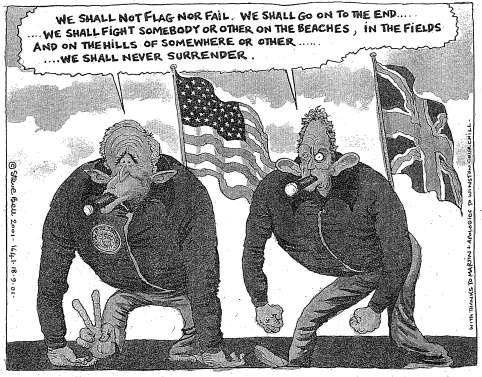 The destruction of the World Trade Centre was an act of such unbelievable horror that, in a way, it almost has to be taken out of context and left, by cartoonists wielding their bluntest of blunt instruments, untouchably alone. But the political consequences of that instigating atrocity are fair game. After all, isn’t the freedom to attack our leaders as hypocritical, sanctimonious megalomaniacs one of the freedoms we’re supposedly fighting this supposed war for? As a profession, unlike our American colleagues, British cartoonists are more detached and have reacted to the War Against Terrorism, after having recovered from the specific events of 11th September, in the same way we react to everything, which is pretty much no holds barred and as much as our editors will let us get away with (and there’s nothing new there). And among cartoonists themselves life carries on as normal. As I heard the Standard’s Patrick Blower say gleefully to Steve Bell in the pub a couple of weeks ago:

"Not having a very good war, are you, Steve?"