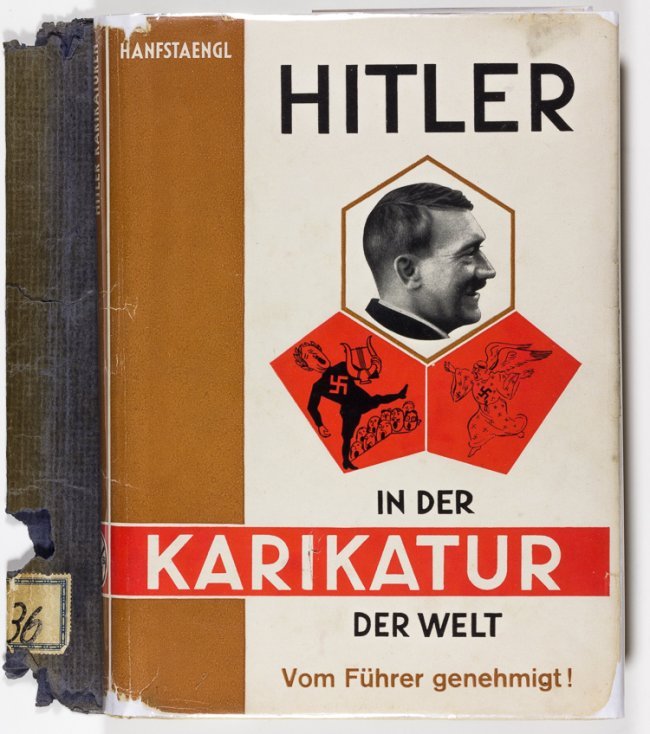 Adolf Hitler is alleged to have had many secret vices, ranging from the fantastic (swastika-emblazoned black leather underwear) to the mundane (cream cakes), but one of his lesser vices was collecting cartoons of himself and by 1933 he had a collection of several hundred, even requesting originals from such well-known artists as David Low.

In 1932, Hitler showed a particularly mordant cartoon to his friend Ernst “Putzi” Hanfstaeng1, his Foreign Press Secretary, remarking that he looked forward to the time when he could suppress such works. The Harvard-educated Hanfstaengl had a better idea: turn the cartoons back on the cartoonists; use cartoons attacking Hitler to support him by pointing out the “errors” in the cartoonists assumptions. The result was a most unusual – and very successful – book: Hitler in der Karikatur der Welt / Tat gegen Tinte (Hitler in the World’s Cartoons / Facts versus Ink). The book was published by Verlag Braune Bücher Berlin Carl Rentsch, a little-known house, suggesting a feeble attempt to make the book appear “unofficial” and therefore an “independent” analysis.

Tat gegen Tinte, as it was generally known, was a 175 page book in which seventy-one major cartoons are displayed in chronological order (1924-33) on the right-hand pages (a miscellany of smaller works is given at the end) with comments by Hanfstaengl on the left-hand pages, in which he contrasts the “Tinte” (Ink) with what he considers to be the “Tat” (Acts or Facts). Some cartoons are striking in their incongruity: one from Simplicissimus of January 16, 1928, has Hitler resembling a nineteen-sixties cartoon of Harold Macmillan. Some, notably those from Pravda, are crude in the extreme; others could stand in their own right as works of art, notably some of the works in Der Wahre Jacob and that of the unidentified artist in the miscellany whose simple caricature [Figure 1] fuses the styles of Wyndham Lewis and Modigliani to terrifying effect.

What, then, was the purpose of Tat gegen Tinte? Hanfstaengl said in his autobiography that the book was written, in consultation with Hitler, to refute the “lies” propagated by the cartoons. This is certainly what Hanfstaengl tried to do with his commentary; however, with the benefit of hindsight, the book is revealing in its composition. Up to 1932 the majority of cartoons are from German journals; after the nazis came to power, in January of 1933, the composition changes. Of the thirty-six cartoons dated 1933, only two are German, one Austrian, and the rest foreign. One reason for this can be found in the list of journals, given at the end of the book, where the phrase “erscheint nicht mehr” (no longer appears) is appended to many German newspapers.

The choice of cartoons reveals something of Hitler’s insecurities, in which context it is important to remember that this was a book written for a German audience; to the best of this author’s knowledge, no foreign translation was published. Fourteen (20%) of the cartoons selected for Hanfstaengl’s rebuttal clearly respond to the question, popular at the time: Who really controls Hitler? Of these, half concern accusations that Hitler was the tool of the exiled Kaiser, through his son, August Wilhelm (Auwi), a prominent member of the nazi party. While few were asking such questions by 1933, it seems that this remained an area of concern for Hitler. Equally prominent are the cartoons reflecting the violent part played by the nazi party in Hitler’s rise to power. Allegations of militarism are the next most common category, with eleven (15%) cartoons, mostly published after January, 1933, and mostly from the foreign press. One is led to wonder why. Hitler’s militarism, as presented to the German public at that time, was limited to repudiation of the Versailles Treaty, re-armament, and the presentation of the new Germany as an armed bulwark against “Bolshevism”. These were all popular with the average German. Was Hitler afraid that the foreign press could see behind the mask?

Only seven cartoons deal with Jewish issues. All appeared in 1933 and the first two are dated March 23, just before the “Jewish Boycott Day”, which the nazis had proclaimed for April 1, in which they urged “true” Germans to boycott Jewish-owned businesses. The most incisive is that from J’accuse!, a London-based magazine dedicated to exposing racial hatred. [Figure 2] According to Hanfstaengl, the “Jewish Boycott Day” was a response to the boycott of German goods by foreign Jewish organisations, especially in the USA, and was not meant as a fool’s game, but as a serious warning. This is merely repeating the party line, as is his claim that Jews in Germany exert influence out of all proportion to their numbers. What is at first sight unusual is that Hanfstaengl cites the British Daily Mail in support of his arguments. However, that newspaper had been a supporter of nazism and was to remain so for a few more years and Hanfstaengl uses it in support of his arguments on several occasions. This use of the foreign press in support of his arguments appears to be the limit of Hanfstaengl’s sophistication. It is impossible to judge how effective it was. 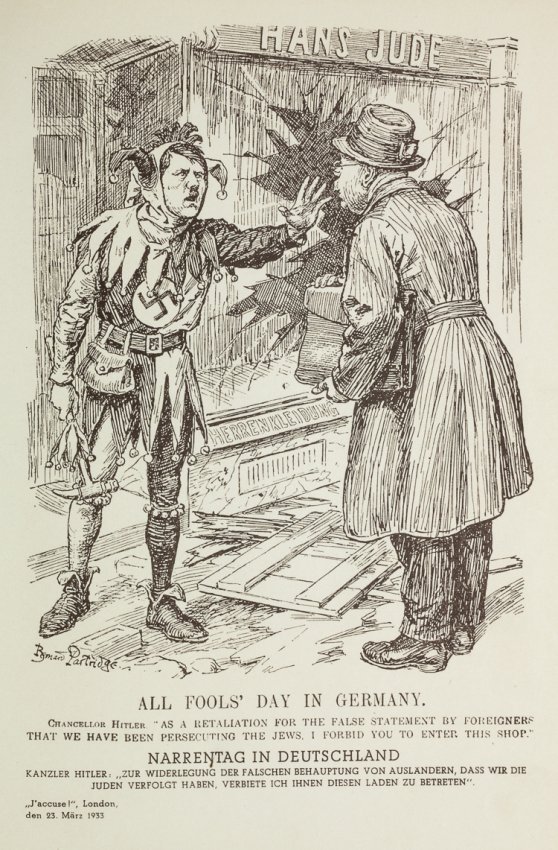 In his list of newspapers at the end of the book, Hanfstaengl carefully notes which journals are part of the “Jewish Press” and in his comments he takes every opportunity to attack this mythical body. Figure 3 shows a cartoon from an un-named French language journal – from Cairo, of all places – and captioned, in French: “If foreigners accuse of barbarity, we’ll give another turn to the screw!” Hanfstaengl’s response is worth quoting in full:

Here the Jewish Press states that Hitler has set up a “Jew-press” in Germany and tortures the Jews to leave.

Concerning this kind of atrocious lie, the Daily Mail itself said in London on July 10, 1933: “The most malicious slandering of National Socialism is found more openly in the circles of the (British) public and the (British) press, than in the Soviet regime which is most eager to praise.”

The fact is that up to the seizure of power by Hitler, Germany had a strong Jewish Press (Mosse, Ullstein etc.), with which the Jews oppressed and tortured the Germans for many decades, both mentally and politically. Only under Hitler has each Jew press in Germany been eliminated.

Once again, Hanfstaengl refers to the Daily Mail for support. Another typical response accompanied an anonymous cartoon entitled “The First Victory” [Figure 4] which originally appeared in Candide, Paris, and was reproduced in J’accuse! in the summer of 1933. According to Hanfstaengl, accusations that Jews are being murdered in Germany are false rumours put about by “German Marxist national traitors within and outside Germany”. He goes on: “The anti-Semitism of the National Socialist movement in Germany is a completely bloodless defence of an intolerable foreign element. If Jews are ‘losing their heads’ in Germany it is at the most from nervousness – and a bad conscience.”

Finally, one of the gems of the collection is from Liberale Wegwijzer, Rotterdam, dated June 30 and entitled “Hitler’s Nightmare”. [Figure 5] And what is causing the brave Führer to wake in a cold sweat, amid a sea of phantoms? Shortly before the cartoon appeared, a Polish Jew, bearing the family name of Hitler, had, with much press coverage, legally changed his name to Hiller. The Press had a field day: Hitler was a Jewish name!; Hitler was not a “pure Aryan”! etc. Subsequent historians have investigated this, and similar, allegations in depth and there is not a shred of documentary evidence to suggest that Hitler had Jewish antecedents – though that does not prove that he did not. Once again, Hanfstaengl’s commentary is far from sophisticated:

“The story that [Hitler] is a Jewish name is obviously made-up. If it were true, then drawing attention to the fact would only be welcomed by German Jews ... [because when] someone becomes well known, in each case they impudently state that the person concerned is a Jew: e.g. Wagner, Brahms.”

One can only assume that Hanfstaengl was raving.

Was it worth it? In propaganda terms, probably not. Hanfstaengl’s mistake was to pit words against images. His prose, in the original German, lacks the wit and bite of many of the cartoons and his responses are, for the most part, predictable repetitions of party propaganda. Only the most die-hard nazi would buy such a book to read the text; most bought it for the pictures. Most probably treated it like an annual book of Giles cartoons: something amusing to while away Christmas Day afternoon, after a heavy meal. For Hanfstaengl, however, it was certainly worth it: it made him a lot of money. After falling out with Hitler, he fled Germany and became a consultant to the US Government. How he explained away his book is not known, and it crops up in his FBI file as no more than a footnote.

1. “Putzi” can best be rendered in English as “Titch”. Hanfstaengl cried out for caricature: a two metre tall, round shouldered dolichocephal, he bore a remarkable resemblance (save the teeth) to the actor Richard Kiel, who played ‘Jaws’ in the James Bond film ‘Moonraker’.