Boris Efimov was born as Boris Fridland in Kiev on 28 September 1899, the second son of a Jewish shoemaker, Yefim Moiseyevich Fridlyand (1860–1945). Boris was a cousin of the famous Soviet photographer and journalist Semyon Fridland. Shortly after his birth, his family moved to Bia?ystok, where he grew up alongside his older brother Mikhail. At 11, Boris saw Czar Nicholas II pass by in a coach. During the First World War, his family fled the advancing German armies and returned to Kiev, where Boris pursued legal studies. He also studied art and began to express himself through caricatures of politicians, the first of which were published in 1919. During the Civil War that followed the Bolshevik Revolution, the brothers supported the Bolsheviks for to sympathise as Jews with the anti-Semitic White Russian counter-revolutionaries was unthinkable. "My chances of survival," Boris later said, "would have been the same as if I had applied to join the Nazi Party." As Jews in the Ukraine, which during the Civil War saw vicious anti-Semitic pogroms, Boris and his brother decided to get rid of their Jewish sounding last name, Fridland. In doing so, they decided to adopt different surnames, because reprisals were often carried out against whole families, and Kiev, where they lived, constantly changed hands during the Civil War. Boris took the surname Efimov while Mikhail chose Koltsov.

From 1920 to 1921, Efimov designed posters and brochures for the communist organ Agitprop. He moved to Moscow in 1922 after Mikhail, who worked as the editor for Pravda, used his connections to get Boris a job drawing political cartoons for the high-circulation daily broadsheet newspaper, Izvestia. In 1924, Mikhail became important enough to have been among Lenin’s pallbearers. 1924 also saw the publication of Boris's first published anthology of political cartoons. Leon Trotsky, who had become a fan of Efimov's cartoons, agreed to write the introduction. The Editor of Izvestia reluctantly agreed to print the words of Trotsky as Stalin now saw Trotsky as a rival for the Soviet leaderhip. The editor was later executed for his misdemeanour. Despite the obvious danger to Boris he became good friends with Trotsky. Remarkably their friendship did not suffer from the fact that Boris regularly demonised Trotsky in his cartoons depicting him as a vicious murderous quasi-fascist. When in 1929, Trotsky was to be deported from the Soviet Union, Boris visited him to say goodbye. Although he did this as secretly as possible, Stalin found out and remarkably took no action. For anyone else it would have been a death sentence but Boris's cartoons were obviously a vital propaganda tool to the regime. This would not be the first time, Boris was saved by his talent to draw.

Throughout the 1930s, Hitler and the Nazi leadership were unending targets for Boris's vitriolic pen so much so that Hitler personally vowed to shoot the cartoonist if he ever got to Moscow. During Stalin's show trials in the late 1930s, Efimov compliantly drew vicious political cartoons against those he had previously so admired within the Soviet leadership, depicting them as Nazis and spies whilst knowing the accusations against them must have been false. The cartoonist was sent by Izvestia to cover Bukharin's trial, and it was expected that he would portray Bukharin as guilty. Boris felt he had no choice but to acquiesce:

"What was I supposed to say when I heard with my own ears how he confessed that he was a traitor, a turncoat, an enemy of Soviet power? It was a complicated time. I knew that if I said, ‘No, I won’t!’ I would end up in the very same place. My family, my wife would be killed. I recall those cartoons with aggravation, with shame, with disappointment, but I couldn’t have acted differently then."

As more and more people were affected by what became known as the 'Great Terror' and 'disappearances' became common place especially in Moscow, Boris found the whole situation more and more difficult to comprehend:

"You would arrive in the morning and ask where is Yuri? Well, they had taken him away in the night. You couldn't discuss it any further. The maximum you could say was, "He turned out to be an enemy of the people". I couldn't really believe that we had so many enemies of the people, but to discuss it was not done. And then you thought well maybe they're not arresting people for nothing, maybe there's something in it, maybe it turned out he was guilty of something."

It was at this time, that his brother Mikhail was arrested by the NKVD. His growing prominence within the Party had caught Stalin's paranoid eye. the dictator had him tortured, officially sentenced to 10 years in a Siberian Gulag and then shot. Boris was mortified. Many years later he would refer to this as “a wound that does not heal”. This tragedy was compounded by the fact that as the brother of an enemy of the people he was unemployable. It was not until eighteen months later after the Germans had invaded Russia, that Boris was brought back, now required to assist the war effort. Despite the fact that the regime had murdered his brother, Boris felt he had little choice but to continue to support it:

" I could have said, "No! You killed my brother, I'm not going to work." But they would have sent me to the same place. I still had my parents, a wife and a young son. If I had done that, they would all have died. So I went back to work. But you need to know that my work was directed towards fascism, towards Hitler. I considered that, despite what my relationship with Stalin was like, my work was needed as a weapon against fascism."

During the war, Stalin even criticised Boris for being racist for drawing the Japanese with huge buckteeth. The dictator, who was trying to keep the Japanese on friendly terms, felt such depictions might damage relations between the two countries. At the end of the war, Boris along with the writer Vasilii Grossman travelled with Russian troops to the death camps of Treblinka and Majdanek which they had just liberated:

"I will never forget the moment that I arrived at the death camps. As I was walking around I came to a women’s bunk. I don't know what pulled me there, but I went to one of the beds and put my hand under the mat, and happened to come across a holiday prayer book the 'machzor for Yom Kippur'."

Boris gave the prayer book to his mother and said it was this that kept him connected to Judaism for the rest of his life. Boris then traveled to the Nuremberg Trials with the task of caricaturing the Nazi defendants. He was then ordered to poke fun at the Western powers due to the growing mutual distrust between East and West in what was transforming into the Cold War. 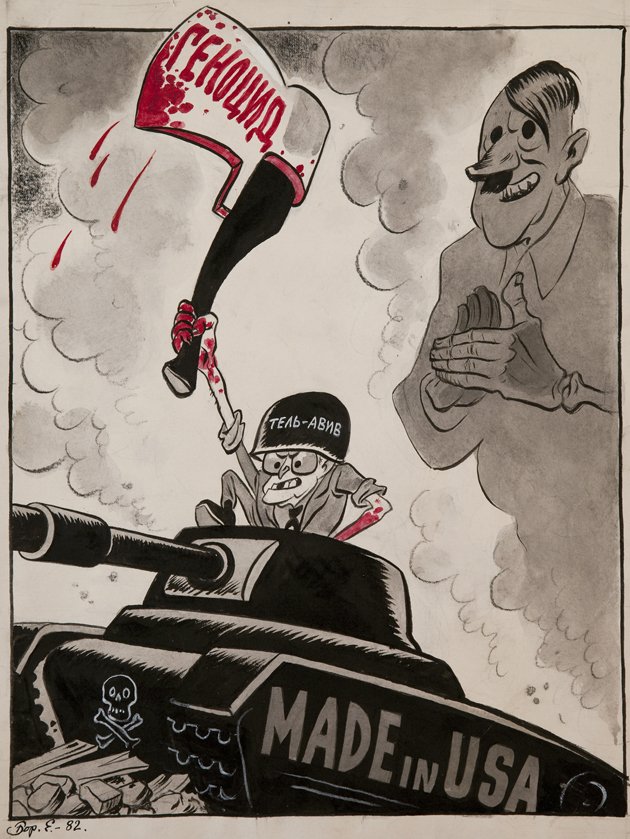 Efimov's cartoon's on Israel became over time particularly malicious, despite the Soviet Union initial support for the creation of the state in 1948. By the 1960's, Boris personified Israel as a blood thirsty fascist client state of American imperialism. During the 1967 and 1973 wars, Efimov personified Israel as a burly, gun-toting aggressor. In some cartoons, the Star of David merges with a skull and crossbones and although he steered clear of Jewish physical stereotypes he did use Nazi imagery to associate it with Israel's actions. During the Six Day war, Boris even signed an official letter condemning Israel for its aggression towards the Arab states surrounding it. Boris later argued that his own anti-Israel cartoons needed to be seen as part of an international political context, and he viewed them as understandable at the time but was later ashamed of them.

Efimov underwent a spiritual awakening at the age of 100 when he met the chief rabbi of Russia, Chabad-Lubavitch Rabbi Berel Lazar. He started to practice his religion. "It took a 100 years to learn about Judaism and even put on tefillin," he later remarked. When Boris turned 107, several Israeli newspapers reported that he was very likely the world's oldest living jew.

Efimov remarkably continued to show loyalty to Stalin. He still wore his two Stalin Prize medals on his chest and expressed gratitude towards the bygone dictator. For despite being responsible for his brother's death, the cartoonist felt beholden to Stalin for his life and career:

"He gave me my life and my work – how can I not be grateful for that?” Efimov said. “He could have lifted his little finger, and we wouldn't be having this conversation today."