by Dan Carrier of the Camden New Journal 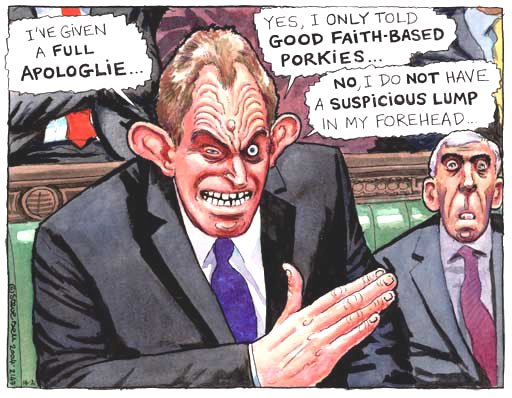 Steve Bell cannot wait for the Prime Minister to give up the day job. It is not specifically because The Guardian’s political cartoonist has against Tony Blair, although if you get him started on the Labour leader’s philosophy, an anti-Thatcherite rhetoric quickly emerges, it is that just after drawing him almost every single day since he took over as leader in 1994, he fancies a break.

Bell’s latest book is a collection of some of his finer cartoons that grace The Guardian’s comment pages on a near-daily basis. It is a vicious lampooning self-help book supposedly written by Tony Blair and having sorted through literally thousands of pictures he has created of Blair to complete the book, he says, like many Labour supporters, he is suffering from Blair fatigue. "His leaving is taking a glacial slowness" says Bell "and will I miss him? I often think about this and the answer is an emphatic ‘no’. I have listened to him come up with the same arguments; day-in-day-out and I have done him to death." Producing his daily strip, If…, as well as leader cartoons, means he develops an intimate knowledge of every nook and cranny of leading politicians faces. He continued: "I may miss doing those ears and his mad eye after a while. With John Major, it was a great relief not to have to draw him anymore, although I did get slightly nostalgic when I had to drag him out again after the Edwina Currie business." Blair’s replacement, Gordon Brown, has already graced Bell’s column on many occasions and he has his Brown caricature perfected. It’s the new Tory leader David Cameron who has been causing him problems. He said: "I have not yet come up with an animal to represent Dave yet. I have played with some ideas, casting him as a weedy Tree Man. But he is problematic because I just don’t know what he is about. He is still finding himself and that gives me very little to go on."

Steve Bell’s career at The Guardian started in 1981. He was born in London in 1951, he studied art at Leeds University and worked for magazines including the New Statesman and Time Out before joining The Guardian. His job gives him the chance to comment through humour on some of the biggest events of the past 25 years and mercilessly rib the people that made history. But altogether he was handed such ridiculous looking characters as Ronald Reagan and Mikhail Gorbachev to work with, it was not always easy to produce a daily strip. He recalls struggling with Neil Kinnock, the Labour leader from 1983 until 1992. He said: "Kinnock was very hard to draw, because all there was to him was the fact he was basically ginger. I always used to go big on the freckles, just to add some definition. It wasn’t very fair, he wasn’t that freckly but that was all I could think of for those nine long years. And although he cruelly mocks the great and the good each day, his pictures of Cherie Blair, he freely admits are the work of a "heartless pig", he thinks those featured are thick skinned enough to take it. He said: "I am sure Blair reads my strip. I know Margaret Thatcher never went near The Guardian, but I think Tony Blair may occasionally glance at it. Put it this way, I was once sitting near him at conference and he spotted me sketching. He winked at me and pulled a face." But Steve Bell says he would not look at If… or read his book if he was in Blair’s shoes. “If it was me, I would not look at it. It is cruel and personal but it serves him right. I do not care about him as a person. I do not hate him, not like how I hated Margaret Thatcher. With Blair there is no point and that is the ultimate message." And the self-help book gets to the core of Blair’s public persona. Bell recalls: "I picked up a self-help book in a shop entitled I can make you thin. It was about dieting for larger people like myself. I read it and noticed it was written in that strange, breathy way and it struck me how much like it was listening to Tony Blair’s preachy oratorical style. So I wondered what it would be like if the premier did it and to write it I really had to get into his head. Not a pleasant thought and another reason I am quite looking forward to the end of the Blair government."