After working as a sports illustrator in Melbourne, Norman Lindsay joined the Sydney Bulletin in 1901 eventually becoming chief cartoonist. While the Bulletin provided Lindsay with an income his creativity was stifled by the strict editorial guidelines of the publication. Regardless of the fact that these works were cartoons his attention to the message and tonal detail was painstaking. He would complete his cartoons at his home in Springwood from editorial instructions. In his early years he corresponded with the newspaper by post and later by telephone. As the Bulletin began to fail on the back of its historically strong and unpopular political views Lindsay's association was terminated by the then editor in 1958. Lindsay is widely regarded as one of Australia's greatest artists, producing a vast body of work in different media. His art continues to climb in value today. In 2002, a record price was attained for his oil painting Spring's Innocence, which sold to the National Gallery of Victoria for $333,900.

Preparatory drawing of a Gladiator 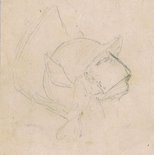 THE EXPLORERS First Whaler: Narrandera's the place for dust storms