Under the pseudonym Kipling, Bailey was best known as a cartoonist for his 'Stackup' strip, the politically incorrect developer who featured every week in Property Week and then later in the Estates Times and amused a generation of surveyors. He also published a number of books, including How To Be A Property Developer, How to Be An Estate Agent, and All Write, a guide to effective writing. His most recent book, Risky Business, examines the potential risks to international organisations of terrorism, extortion, bureaucracy and corruption that go far beyond the financial and commercial risks usually anticipated.

I'm really upset about this increasing invasion of privacy

Now come along, Payne and Angwish, why aren't you in the lsit of Agents with the most instructions?

the way things are going -

There must be a brighter side to the news =

How is it that a Chairman can allegedly pinch - 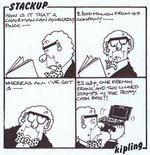 Dear shareholder, we have been through a period of world-shattering importance -

The bbc are what? 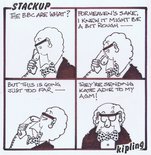