The Cartoon Century by Tim Benson 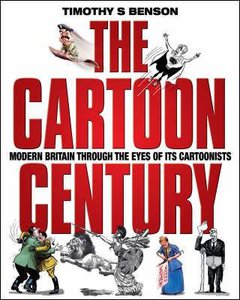 Cartoons have the astonishing power to encapsulate a historical moment or popular mood, and this magnificent new survey tells the story of modern Britain through hundreds of the finest examples. Year by year, from the death of Queen Victoria to the downfall of Saddam Hussein, it shows the views taken by the nation’s leading cartoonists of the issues and personalities that dominated the news – some of worldwide significance (the outbreak of the Second World War, for example), some of major social and political importance (for instance, the rise of the Suffragettes), some reflecting more parochial obsessions (as, for example, the Edwardian cartoon bemoaning the presence of foreign players in English football teams). Some show a nation united (the outbreak of the First World War); more often they reveal where battlelines have been drawn, whether they’re cartoons supporting or attacking appeasement, trade unions, the EU or contraception, or seeking to praise or bury Winston Churchill, Margaret Thatcher, Tony Blair or the Archbishop of Canterbury. Many have achieved iconic status (David Low’s savage attacks on Hitler; Steve Bell’s portrayal of John Major with his pants over his trousers), but the majority of the cartoons shown here have not seen the light of day since they were first published, or were rejected or censored by contemporary newspapers. Together, they offer fascinating and revealing snapshot views of Britain over the course of a tumultuous century.