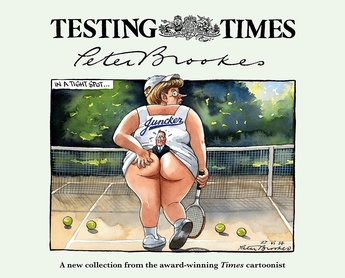 Click to view a larger version of this image.
SIGNED BY THE CARTOONIST
Testing Times is the brilliant new collection of satirical sketches of contemporary political life by Britain's greatest living cartoonist, The Times' Peter Brookes. Brookes, multiple winner of the British Press Awards Cartoonist of the Year, here showcases the stand-out pieces from his opinion page cartoons in The Times, up to the minute and breathtaking in their bite and wit.Testing Times subjects our political masters to the most brutal of roastings, satirising those who profess to lead us and holding the mighty to account. Always hilarious and beautifully crafted, these cartoons - which take us well beyond the 2015 general election and its historic fallout - are the sumptuous evidence of a contemporary genius at work.