Strube: The World’s Most Popular Cartoonist by Timothy S. Benson 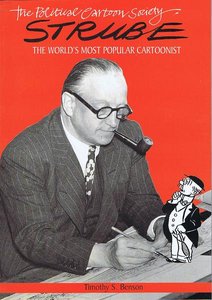 Strube: The World’s Most Popular Cartoonist by Timothy S. Benson

This first biography on the life of Sidney Strube not only offers a cartoon journey through 20th Century British History, but also an insight into the world of editorial cartooning during its heyday. Strube was the editorial cartoonist of the Daily Express between 1912 and 1948. During these years, he assisted in making the Daily Express the best selling national newspaper in the world. In 1915, Strube enlisted in the Artists Rifles Battalion and served on the Western Front alongside other artists and writers such as Paul Nash and Wilfred Owen. Strube’s greatest creation was the ‘Little Man’, a figure large sections of the population then identified with. During the 1930s, Strube’s ridiculing of Hitler and Mussolini led the Daily Express to being banned in Germany and Italy. Strube’s name, alongside many other prominent critics of Hitler’s regime, was discovered on a Nazi hit list after the war. The book is packed with not only many of Strube’s most famous cartoons, but also photographs and cartoon related images that have never been published before.