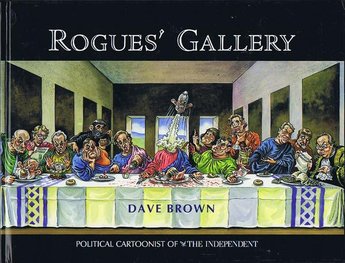 What exactly was the joke in Leonardo’s famous cartoon, and why is the Laughing Cavalier so amused? These are just two of the mysteries that this book fails to solve. However what you will discover in Dave Brown’s reinterpretation of the Old Masters is a series of wickedly funny satires. Here he employs his inimitable draughtsmanship to stunning purpose, poking a paintbrush in the eye of our political leaders, and twisting the palette knife to rib-tickling effect. The Rogues’ Gallery series has appeared in The Independent since January 2004, and this book is a selection of the best of over three years of cartoons. The book is fully illustrated in colour and includes the original paintings that go alongside Brown’s cartoons throughout the book.