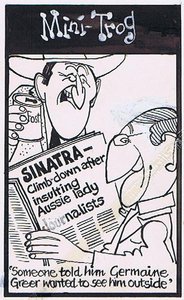 During a visit to Sydney in 1974, Frank Sinatra made the mistake of being very politically incorrect and referred to Australian women journalists as 'two-dollar hookers'.This led to a siege by Union members who also refused to service his rooms and airlines that refused to fly him out of Sydney. He who was holed up in the Boulevard Hotel in William Street, near Kings Cross in Sydney until the situation was resolved in a meeting with the then current Union boss Bob Hawke and he was allowed to leave.

Medium Pen and ink on art board