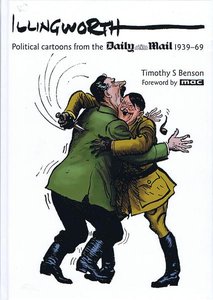 Leslie Gilbert Illingworth (1902 – 1979) was perhaps one of the last great practitioners of penmanship to take up political cartooning. This book is not only a biography of one of the twentieth century’s most important cartoonists, but also a visual and detailed chronicle of thirty years of history through roughly three hundred cartoons that were originally published in the Daily Mail. The book has over 300 cartoons in it, including Illingworth's most famous ones.