"I think he's come to see the new member for Smethwick" 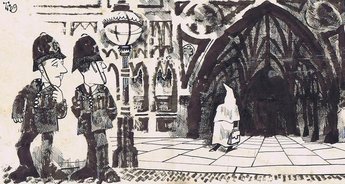 In the 1964 General Election Shadow Foreign Secretary, Gordon Walker, was defeated in controversial circumstances by Tory candidate Peter Griffiths. Griffiths supporters had covertly circulated the slogan If you want a nigger for a neighbour, vote Liberal or Labour.

Medium Pen and ink on artboard