"I only said I thought the ideal solution would be to sink Peter Masefield in the Thames Estuary and use him as a landing-strip!!" 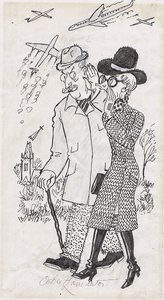 Maudie Littlehampton London Airports original cartoon artwork. Peter Masefield was chairman of the British Airports Authority (BAA). In five years he took over the running of Heathrow, Gatwick, Stansted and Prestwick from the civil service. He was caught up in the rows over the siting of a third London Airport, and when he made it plain that he thought government plans for an airport at Maplin or Foulness were lunacy, there were calls in the Commons for his dismissal. Against the run of opinion, he insisted that Stansted must be developed and provided with a second runway.