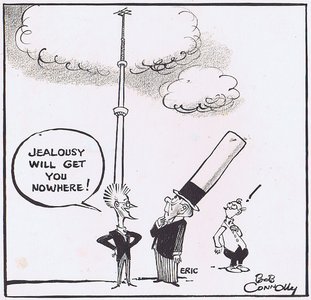 Minister for Railways Eric Schoeman Sentech Tower South Africa original cartoon artwork. The Sentech Tower, as it’s known today, was originally called the Albert Hertzog Tower, named after the late apartheid minister of posts and telegraphs, whose greatest claim to fame was a speech in which he said South Africa would get television over his dead body.