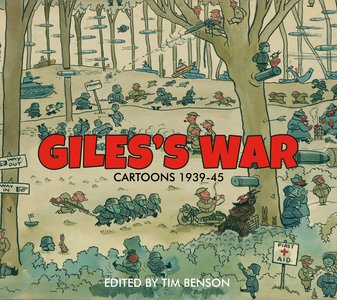 Giles's War 1939-1945 by Tim Benson. The first biography of Carl Giles to use his own archive material and featuring never before seen cartoons from the Second World War. Few contemporaries captured Britain’s indomitable wartime spirit as well or as wittily as the cartoonist Carl Giles. Now, for the first time, the very best of the cartoons he produced between 1939 and 1945 are brought together, including many that have not seen the light of day in over 75 years.

As a young cartoonist at Reynold’s News and then the Daily Express, Giles's work provided a crucial morale boost – and much-needed laughs – to a population suffering daily privations and danger, and Giles's War shows why. Here are his often hilarious takes on the great events of the war – from the Fall of France, via D-Day, to the final Allied victory – but also his wryly amusing depictions of ordinary people in extraordinary times, living in bombed-out streets, dealing with food shortages, coping with blackouts, railing against bureaucracy and everyday annoyances. It's a brilliantly funny chronicle of our nation’s finest hour, as well as a fitting tribute to one of our greatest cartoonists.