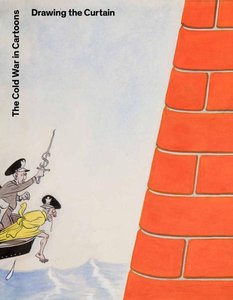 The Cold War in Cartoons by Timothy S. Benson

Drawing the Curtain: the Cold War in Cartoons offers a new perspective on how the Cold War was fought – through Soviet propaganda cartoons. 75 Soviet cartoons are juxtaposed with western examples to show how each side responded to key events of the period. Accompanied by short commentaries, the cartoons combine to form a highly entertaining visual history of east-west relations, from Churchill’s post-war acknowledgement of an ‘iron curtain’ separating the two sides, to the fall of communism in 1991. Together they reveal not just the obsessions and ferocious propaganda campaigns of the Cold War, but also some startling similarities in the way each side portrayed the other. Introduced by Sergei Khrushchev, son of the former Soviet leader, and with essays by the leading cartoon expert Dr Tim Benson and the cold-war historian Dr Polly Jones, the book is innovatively designed to highlight the artistic qualities of the Soviet cartoons, at full page, with the western cartoons and historical background given on interleaving inset pages. An exhibition at the Guardian, showing 35 of the cartoons from the book, will run throughout January and February 2012.