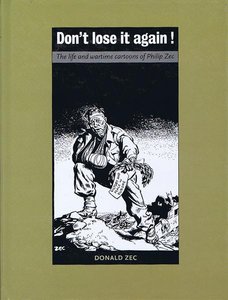 Don't lose it again! The life and war-time cartoons of Philip Zec by Donald Zec

Philip Zec is now widely regarded as the most important political cartoonist of Second World War. From 1939 to 1945 he produced 1529 cartoons for the Daily Mirror, which caught brilliantly the defiance of the British people at war. Some of his finest drawings are reproduced in these pages. Two cartoons made history: the first, the notorious ‘seaman on the raft’ cartoon was astonishingly misinterpreted in Downing Street and led to a furious debate in Parliament: the second, a moving evocation of the folly of war gives the book its title and marks the sixtieth anniversary of VE Day on 8 May. Written by the cartoonist's brother Donald, the award-wining journalist and author, Don’t Lose It Again hallmarks a unique talent which contributed significantly to the British war effort. This book is probably the most incisive biography of a political cartoonist since Sir David Low’s own autobiography 49 years ago