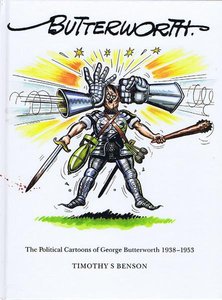 This book graphically illustrates the period 1938 to 1953 through the amusing and beautifully drawn cartoons of George Butterworth, almost all of which have not been seen since they were first published. Butterworth started his career as a sports cartoonist on the Stockport Advertiser and the Cheshire Daily Echo. When war was declared against Nazi Germany in September 1939, Butterworth took over as political cartoonist on the Manchester Daily Dispatch. Butterworth’s daily cartoons proved to be such a success that he soon came to the personal attention of both Hitler and Mussolini. After Germany had been defeated in May 1945, Butterworth prophetically turned his attentions to the threat Stalin, and the Soviet Union, posed to the Western Democracies. During this period, Butterworth also poured scorn on the new Labour Government led by Clement Attlee. The post-war years of austerity and financial crisis were all imaginatively used by Butterworth as ammunition for his daily cartoons.