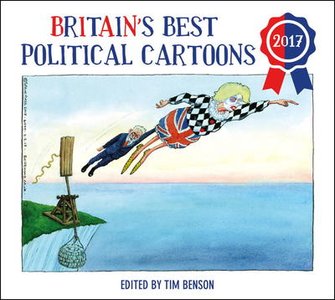 Another blockbuster collection of the year's wittiest political cartoons, featuring artworks by Steve Bell, Peter Brookes, Martin Rowson, 'Mac' and many more. If 2016 was a tumultuous year for politics, with Brexit, the most tempestuous US presidential campaign in living memory, turmoil in the Labour party and the rise to power of Theresa May, 2017 promises to be even more dramatic. How will President Trump govern? How will the most important and contentious political event in Britain for decades play out? And how many times will Foreign Secretary Boris Johnson say something embarrassing on a trip abroad? In tough political times, satire is more important thanever, and in Britain’s Best Political Cartoons 2017, our finest political cartoonists will once again examine the year’s events. The series, edited, introduced and with a commentary by Tim Benson, our leading expert on political cartoons, is now firmly established as a strong seller in the run-up to Christmas, and this year’s edition promises to be more urgent, angry, insightful and funny than ever.

SIGNED BY THE EDITOR