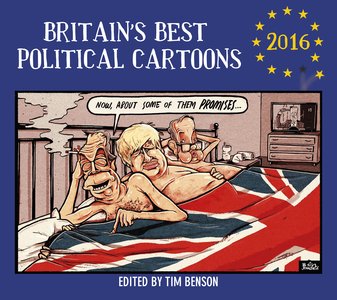 Click to view a larger version of this image.
SIGNED BY TIM BENSON
Britain's Best Political Cartoons 2016 is a compelling, razor-sharp and frequently hilarious collection of almost 200 of the year's most acerbic and insightful political cartoons. All the highs and lows of the past year are covered: from major international events (the migrant crisis, the US presidential election, and the Olympic Games in Rio), to more local issues (the EU referendum, struggles over the Tory and Labour leaderships, and the NHS crisis) - not to mention the offbeat and bizarre (Donald Trump's tiny hands and Jeremy Corbyn's cat). With contributions from Britain's finest cartoonists, including Steve Bell, Peter Brookes, Dave Brown, Chris Riddell and Martin Rowson, it's the perfect bedside book - and a browser's delight.