Gaar Williams was a prominent American cartoonist who worked for the Indianapolis News and the Chicago Tribune. His scenes of horse-and-buggy days in small towns of the Victorian era included situations based on his childhood memories of his hometown of Richmond, Indiana. His cartoon panels captured the flavour of a bygone era to the degree they were deemed worthy of reprinting in the mid-20th century years after his death. After studies at Cincinnati Art Academy and the Chicago Art Institute, Williams began cartooning in 1904 for the Chicago Daily News, where he stayed for three years. He joined the Indianapolis News in 1909. In 1921, Williams moved to the Chicago Tribune, where he stayed for the next 14 years.

Wow! I just happen to think that kid maybe... 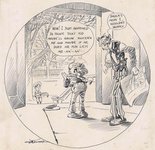 Stealing a puff or two during office hours