Victor Weisz ‘Vicky’, born in Berlin, began drawing caricatures freelance in 1928 after his father committed suicide. Vicky sold his first cartoon aged 15 and subsequently began to work for the journal 12 Uhr Blatt, which took a strongly anti-Hitler stance. The Nazis took over the magazine in 1933 and ‘Vicky’ arrived in Britain as a refugee in 1935. He drew for a whole variety of publications, including the Evening Standard, News Chronicle, Daily Mail, Daily Mirror and the New Statesman. ‘Vicky’s famous portrayal of Harold Macmillan as ‘Supermac’ first appeared in the Evening Standard in November 1958. Randolph Churchill described ‘Vicky’ as a genius and Michael Foot thought him ‘the best cartoonist in the world’.

"Bon voyage, Boss! Everythng's under control - there ain't gonna be any civil war by our Generals, Mr. Macleod is going to settle his little local difficulty, Mr. Thorneycroft has never been so good and Lord H. won't ring his bell while you're away......"

"Hold my hand and I'll take you there - Someday, somehow, somewhere..." [With acknowledgements to West Side Story.] 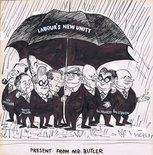 The making of the prime minister

Vicky a long way after Uccello

"Hallo, are you stuck?" he asked. "N-no," said Pooh carelessly. "Just resting and thinking and humming to myself." Winnie-the-Pooh

"I told you we had the ultimate-anti-anti-anti-missile-missile, didn't I...?"

"In this job, sometimes one is terribly busy, and then suddenly everything's quiet." - The Prime Minister in an interview

"Now, I trust that all comrades will in future uphold the sanctity of Conference decisions - as I've done in the past..."

"Thank goodness, we don't have a one-man band like those Socialists!"

"Any white one for tennis?"