In 1988, Matthew Pritchett ‘Matt’ began acting as stand-in for George Gale, at the Daily Telegraph. On the death of Mark Boxer later that year, the editor, Max Hastings, considered Pritchett for the job of pocket cartoonist on the Daily and Sunday Telegraph. Matt was not interested in drawing "'statement' cartoons", and did not like drawing "anything that isn't a joke." Matt describes the subject of his Daily Telegraph pocket cartoons as "ordinary people affected by life", and they have proved enormously popular. Matt’s work has also appeared in Punch, Spectator and other publications. In 2001 he was awarded the MBE. Andrew Marr has noted, that Matt “has dug himself into the consciousness of millions as few of his angrier, more flamboyant rivals have done... His wry, mordant, put-upon couple are to the middle classes what Andy Capp was to the working classes.”

"I'm sorry, is my newspaper bothering you?"

"Ouch! which idiot put this in the Christmas pudding?"

I turned off the heating - I'm saving up for a packet of cigarettes.

"A sweet a day keeps the dentist away." 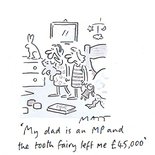 "Oh dear, Mr Clarke, it looks like I'll have to increase my productivity."

Thank you for not smoking