David Low was commissioned by The New Statesman to draw the portraits of the fifty most distinguished people in Britain. Only two men refused to sit for him: John Galsworthy and Rudyard Kipling. Some of these caricatures were also published in The Graphic and The Nation. They later appeared in Low's book Lions and Lambs (1928) and a further post-war set of portraits appeared in Low's Company (1952). 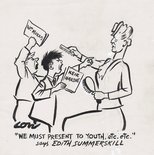