Born in New Zealand and probably the greatest political cartoonist of all time, David Low was first attracted to caricatures and cartoons through reading British comics. Prior to moving to London in 1919, David Low worked for the Sydney Bulletin in Australia. Low joined the Star, a London evening paper and then in 1927 joined the Evening Standard as its first political cartoonist. The Evening Standard’s proprietor Lord Beaverbrook had had to promise Low a unique contract giving him complete freedom in the selection and treatment of his subject matter as well as half a page for his cartoon in order to secure his services. Low joined the Manchester Guardian in 1950. Low created many memorable characters, including the Two-headed Ass, the TUC carthorse, and Colonel Blimp. Describing himself as ‘a nuisance dedicated to sanity’ Low was a hugely influential cartoonist and caricaturist, producing over 14,000 drawings during the course of his 50 year career. See Low and the Dictators by Timothy S. Benson.

Interference of total stranger robbing hunt of all dignity.

Moscow traffic policeman (rather embarrassed by his bourgeois white gloves)

Policemen unwilling to display their ignorance by asking Low and Terry who they are.

The language of feet as studied among the peasants on the Volga boat. 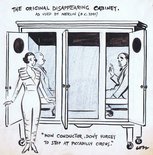 "There's only one drawback about the place. You have to wait till it rains before you can have a bath."

Dammit - Waiter! Didn't I order my lily-petals to be fried on both sides!

Disrespectful visitor from Australia posing for photograph to impress friends at Wagga-Wagga.

I stand before you as a Liberal Tory Anything