Lyttelton was the second son of the Hon. George Lyttelton, a housemaster at the school, and cousin of the 10th Viscount Cobham, Lyttelton came, he said, from “a long line of land-owning, political, military, clerical, scholastic and literary forebears.” Lyttelton went to Eton, and bought his first trumpet in 1936, after slipping away from the annual Eton-Harrow cricket match at Lord’s. In June 1941 Lyttelton enlisted in the Brigade of Guards and went to Sandhurst, receiving a commission five months later. He saw action in Italy where he recalled landing at Salerno with his pistol in one hand and his trumpet in the other (John Jones - the cartoonist JON - was one of the landing officers at Salerno). In 1946 Lyttelton, took advantage of a grant to go to art school. “When I got out of the army I was 25 and didn't feel like going back to anything very academic,” he recalled, “so I went to Camberwell School of Art for a couple of years and round about the same time started playing jazz in various low dives.” In March 1947 Lyttelton and Wally Fawkes 'Trog', a clarinettist who was also studying part-time at Camberwell, joined the George Webb Dixielanders, a semi-professional band of New Orleans-style jazz revivalists.

In January 1948 Lyttelton left the Dixielanders to form his own band, and took Wally Fawkes with him. Humphrey Lyttelton and His Band, with Wally Fawkes on clarinet, soon became the leading traditional jazz band in Britain. In 1949 Trog began drawing the “Flook” strip for the paper, and, as Lyttelton recalled, "tipped me the wink that the job of column breaker would soon be vacant." Lyttelton, who had got married the previous year, got the job, and chose the signature “Humph” for his cartoons. However, in 1953 Lyttelton gave up cartooning to become a professional musician, although he continued to write storylines for “Flook” for another three years.

“In order to counter the slightest breath of scandal, Stainglass, I shall give an account of last weeks collection from the pulpit on Sunday.”

"Pending an exact definition from Moscow of the term "political frivolity', Comrade Spudfarthing, I suggest we should be wise to wipe that grin off our face."

“I must say, Alistair’s opponent took it frightfully well - he came up and shook him by the hand....”

“Oh botheration! Misreported again - they’ve put down my cry of “Ah!” As a cry of “Oh!” And destroyed the whole meaning!”

“Smoking a cigar with the band on? Don’t be silly, chum - that’s the garter!”

“ - and I can assure you that, with a little massage and a good night’s rest, my wife will be ready again for the summer sales tomorrow.”

The members of Room 15 busily brushing up their alternative occupations. 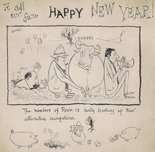 “Come along, now - which of you friendly, co-operative Sudanese has whipped my clothes?”

“How I envy you, darling, being able to treat all this worrying talk about a new waistline with absolute indifference!”

Peer of the realm

“Without wishing to discourage your stand against the matches monopoly, might I ask when we eat?”

“Don’t bother your great-grandfather, Roderick - he’s trying to reach his century before lunch.”