Martin Honeysett sold his first cartoon to the Daily Mirror in 1969 and has since contributed cartoons and illustrations to Punch, Private Eye, Evening Standard, The Observer, The Oldie and many other magazines and newspapers. As well as newspaper and magazine work he illustrated several books, including Sue Townsend’s The Queen and I; Dick King-Smith’s H. Prince and Farmer Bungle Forgets; Bert Fegg’s Nasty Book for Boys and Girls by Terry Jones and Michael Palin, and a series of poetry books by the humorist Ivor Cutler. In addition he published several collections of his own cartoons, including The Joy of Headaches: How to Survive the Sexual Revolution; Fit for Nothing: How to Survive the Health Boom and Micro Phobia: How to Survive Your Computer.

"If you didn't spend so much money on cameras we might be able to afford a real holiday." 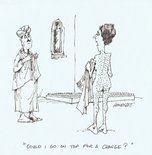 "Someone's left the cap off the toothpaste again."

"it's the recession, she has to take what she can get."