Hartt had drawing lessons from Alek Sass. In 1909, he moved to Sydney after getting a cartoon accepted by the Sydney Bulletin. As a freelance cartoonist, he also contributed to Comments and The Clarion as well as to the Comic Australian. In 1915, Hartt enlisted in the 18th Battalion of the NSW Contingent of the AIF. He was badly wounded in the right hip and ankle at Suvla Bay on 27 August 1915, during the Gallipoli campaign. While convalescing in England from 1916 he contributed drawings to the Bystander, Passing Show and London Opinion. He  also contributed to the British Australasian. His booklet of Digger jokes, Humorosities, included a self-portrait and proved a surprise bestseller, selling over 60,000 copies. To Hartt’s astonishment he was presented to King George V. After his discharge in 1919, Hartt returned to Australia and began work at Smith’s Weekly. He was the first president of the Australian Black and White Artists' Club (1924-30) formed on 17 July 1924. In May 1930 he committed suicide on the remote road near Moruya, New South Wales. His son was killed in action during the Second World War.

SOLD The morning after 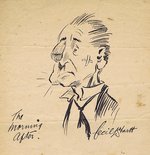