Sir Francis Carruthers Gould was a self-taught caricaturist who joined the Pall Mall Gazette in 1887, becoming the first-ever staff political cartoonist on a daily newspaper. In 1893, he joined the Westminster Gazette and subsequently became acting assistant editor as well as cartoonist. In 1894, Gould founded his own monthly journal, Picture Politics, which ran for 20 years. Politically he was a dedicated Liberal, described by Lord Rosebery as ‘one of the most remarkable assets of the Liberal Party’. He was knighted after the Liberal victory in 1906. Gould’s caricatures were never too savage, he claimed ‘I etch with vinegar, not vitriol’. During the First World War, he designed a series of Toby Jug caricatures, ‘Prominent Personages of the Great War’, including Woodrow Wilson, Lloyd George, Haig and Foch.

CAPTAIN AND FIRST MATE Mr C: "Come lets hitch on and I'll keep the tail up." (Mr Walter Long in a recent speech, Said that Mr Balfour was the Captain of the Unionist Party and Mr Chamberlain his first officer.

The Harp that once again... Mr Winston Churchill moved the Second Reading of the Home Rule Bill yesterday afternoon.

A PRICKLY PROSPECT Lord Lansdowne & Londonberry: "It will have to come over our way later on - "Will it be safe to sit upon it?"

The "Terewth" With apologies to Mr. E T Reed's "Unrecorded History, No. VII". (representing the constitional inability of George Washington to tell a lie). Mr. Joseph Chadband Washington: Oh, my friends! Would that I could tell you,

THE SCAPEGOAT HERD: Driving the scapegoats out into the wilderness. NB The one in the background is hoping that he has been overlooked.

THE TUGELA PROBLEM The Lion: "Come out!" The Oom Tortoise: "Come on!"

A is for Asquith

ALICE AT LAMBETH The Duchess, the Baby and the Cook (With apologies to Sir John Tenniel) 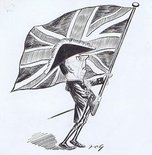 MANY HAPPY RETURNS OF THE DAY MR CHAMBERLAIN