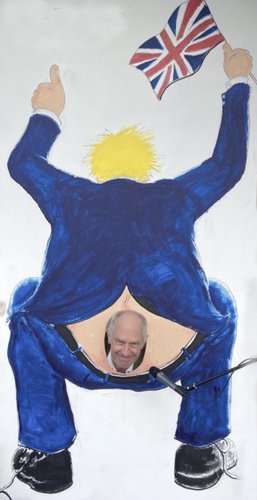 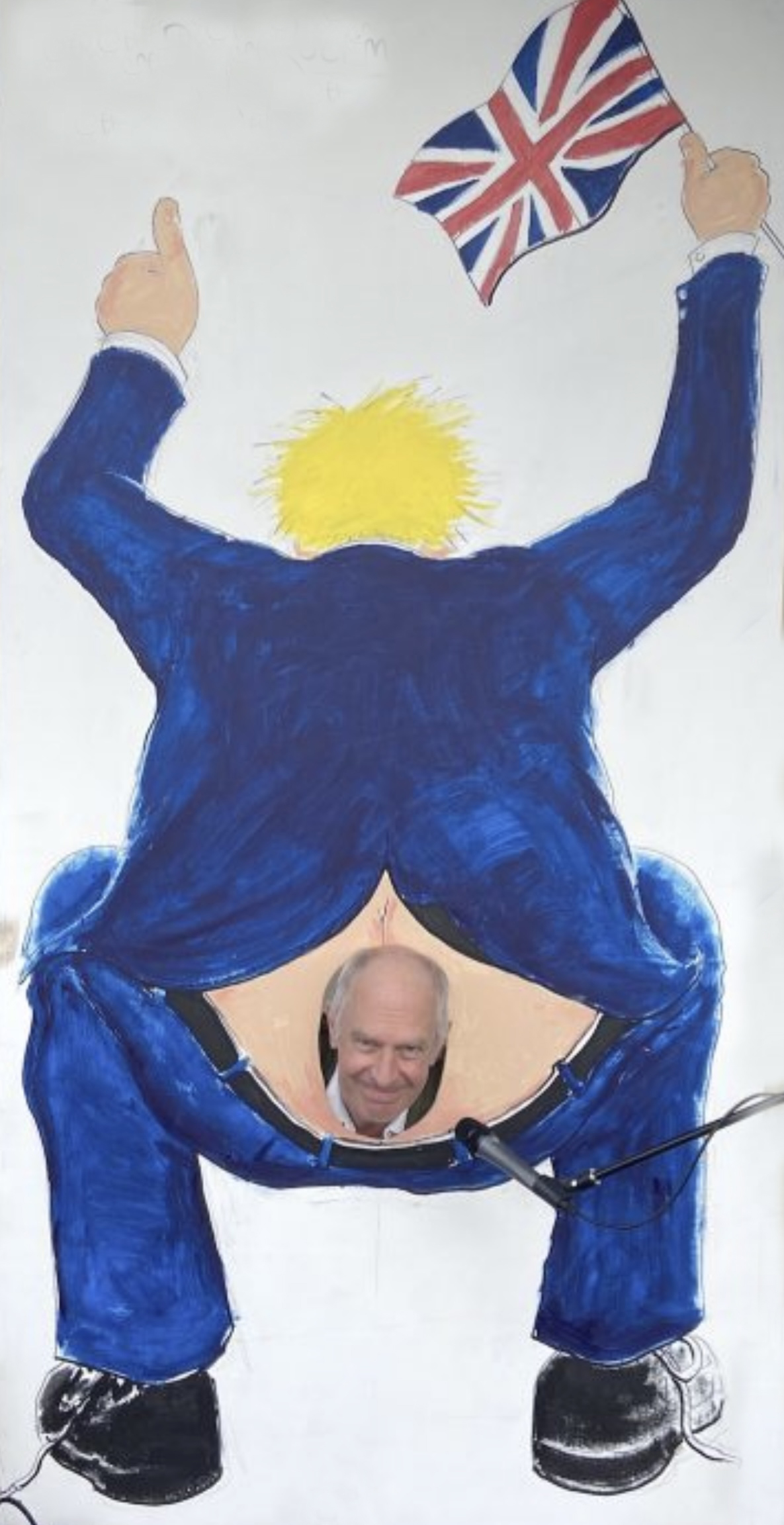 Martin Rowson talking out of someone else's backside for a change!

The first time I ever heard Martin Rowson's name mentioned was shortly before I met him for the first time. I was in the Rae-Smith Gallery in Cecil Court, back in the 1990s, when the co-owner of the gallery, Felicity Rae-Smith told me she had been to a British Cartoonists Association dinner the previous evening and it had been ruined by "a foul-mouthed drunk called Martin Rowson!" For years after I actually got on well with Martin until his hair started to recede and he started strangely always wearing a hat indoors. He then became more and more difficult to deal with as time went on. As the self-appointed Chairman of the British Cartoonist Association (there is no board or committee and Clive Collins only appointed him as secretary) he has run that organisation into the ground by his churlish behaviour. The BCA was originally set up by Sir Osbert Lancaster specifically for Fleet Street professional cartoonists to meet for regular dinners and to distance themselves from the Cartoonists Club of Great Britain which let any cartoonist join. Once in charge, Martin then opened the floodgates and let anyone join as long as they were prepared to flatter him. Dave Gaskill called him an "conceited prick" telling me the dinners became insufferable with an inebriated Rowson holding court, bad mouthing all those he felt threatened by. John Jensen remarked such occasions turned his stomach. Bob Moran told me he would get so drunk Rowson would go temporarily blind and start throwing things out of the restaurant window. Despite Rowson's foul and abusive antipathy towards Conservative politicians on Twitter, the former public schoolboy loves sucking up to those Tory MPs who have attanded BCA Dinners. According to Bob Moran, Rowson spent the whole of one BCA dinner sucking up to David Davis telling him "you're my favourite type of Tory." Despite Rowson's so called left-wing credentials, he can be, again according to Bob Moran, "incredibly snobbish on so many levels." As the self-appointed Chairman of the BCA, Martin Rowson likes to purport that he is a spokesman for the cartooning fraternity. However, he has alienated many in the profession by his boorish behaviour, having,  in the past, tried to steal other cartoonists jobs. "Yes, be careful of Rowson, he stabbed me in the back" said one, while another recently called him a "self-serving shit". Rowson is also incredibly thin-skinned despite bad-mouthing and abusing anyone who threatens his self-professed 'genius'. When Steve Bell told him to "Fuck off" on Twitter, Rowson had a melt down and left twitter in a sulk. However, being the attention seeker he is, he was back on within 48 hours as if nothing had happened.

Interestingly when it comes to talking about editorial cartooning, Rowson, who has always played second fiddle to Steve Bell at the Guardian, generally talks utter drivel on the subject. One colleague also described his cartoons as if "someone had vomited on a sheet of paper", A few years ago, Rowson claimed all political cartoonists had a duty to “offend” but it turns out that he personally always checks with the sub editor at the Guardian that his idea for his cartoon won’t offend readers. When a colleague heard about this he called Rowson a “lickspittle”.

Martin Rowson is responsible for Bob Moran going off the rails. For years he encouraged and nagged Moran to develop an outrageous "persona" as he thought it a prequisite to be a successful political cartoonist. All the great cartoonists however have been mild-mannered self-effacing and reflective people. This has probably more to do with Rowson's own deeply imbedded insecurities. He still supports Moran and feels he has been harshly treated despite Moran being fired for abusing a female palliative care doctor and comparing the government's handing of Covid with the Nazis liquidation of European Jewry.

So it is of no surprise that Martin Rowson is also a virulent anti-semite who enjoyed criticising Israel until he felt forced to stop doing so by what he called the "Jewish lobby". He has personally told me in the past that Jews are obsessed with money and power and he publicly and proudly endorsed Jeremy Corbyn during the 2019 General Election. (See Rowson quote below)